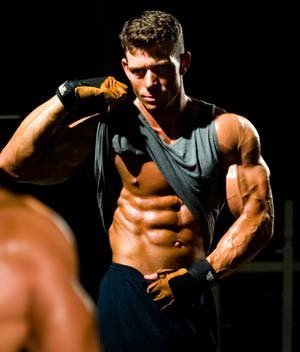 As Lee mentioned in one of his recent Facebook postings, partial reps are a great addition to the end of your last set as a way to eke out a little more muscle stimulation.  What many people don’t realize, however, is that those partial reps, or X Reps as they’re referred to on my website, not only help build muscle fast, they also help you burn fat via growth hormone and testosterone release, both of which are extremely potent fat burners.

If you’ve tried partial reps (X Reps), you know they can produce an incredible burn at the end of any set. Growth Hormone (GH) is linked to muscle burn and with X Reps you can do your usual heavy set on a given exercise and then end with power partials to significantly magnify the burn. You already know the big exercises help trigger testosterone, but with partial reps at the end you can force more GH release as well, thanks to the burn they produce. GH is linked to muscle burn, so it’s a fat-burning double feature and is much more efficient method than just about anything out there, with almost zero wasted effort. That’s one reason that each X-Rep set is at least three times as effective as a regular straight set to failure.

So try this at your next workout… Do your normal sets to positive failure to prime your nervous system for optimal firing.  Do your final set set to nervous system exhaustion with partial reps added to the end.  No break before the X Reps, so as soon as you can’t do another full-range rep, move the weight close to the full-stretch or middle of the rep and crank out partials for max growth stimulation. That’s where you’ll get the most mass stimulation for your efforts combined with the fat-burning muscle burn.

About the Author
Jonathan Lawson has been working in the health and fitness industry for over 20 years; weight training for 21 years, competed in numerous bodybuilding competitions, worked for IRON MAN Magazine for 17 years, co-owns X-Rep.com where he has co-published over 15 e-books and writes a daily training blog.  He has appeared on the covers of, and been featured in, dozens of international magazines, books and e-books.